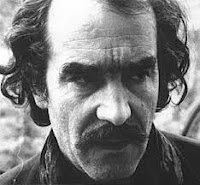 "Currently, my machines are black and sometimes gentle, if not sexy or exuding a contained violence; I finally found the technical means for accomplishing this."
Jean Tinguely

It’s time Jean Tinguely and I had a chat.  We pass in in the lobby but until now, well,  he don’t know me like that. 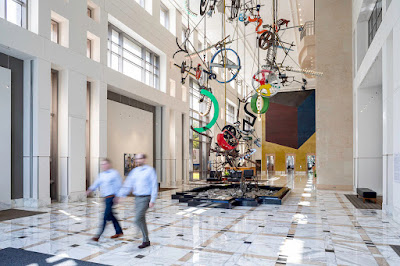 But first, I should  explain why that conversation is overdue.

For many years, when in downtown Charlotte,  I ritualistically made my way to the Carillon Building on Trade St. There, scrap metal swims in an ice-white marble aquarium. It is Jean Tinguely’s 40-foot-tall kinetic beauty, Cascade .

Pulleys and 15 motors guide a whirl of lights and found-art over a turbulent pool of water.  The whole Rube Goldberg affair combines Tinguely's son-of-a-factory-mechanic's aesthetic, he called metamechanics, with bits of Charlotte's history. 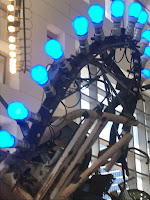 Amongst the commotion swings wheels, a tractor seat (a souvenir from our agricultural days) and a Ferrari hood .   A lion's head  (formerly the Charlotte Hotel cornerstone),  has been repurposed as a fountain, nodding along to the quiet jazz and lights above.

Once, curious about the reactions of those who work in the building, I asked the deskman his opinion on this—this—-thing.  Was it merely an odd assortment of whirring metal one has to skirt on the way to an elevator?

The deskman's response was a surprise:

"I'm the guy who, every morning, gets to flip the switch that sets it into motion," he said with some pride.  "I'm the guy that wakes up the animal." 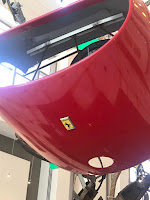 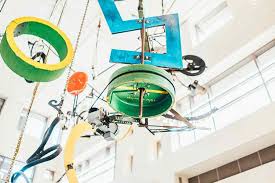 With this perspective, I began to sense a pulse, a heartbeat and the slow evolution that Tinguely built into his creations.  The chains and wires move with a  friction programmed to naturally erode, and like all creatures, change.


It's Time We Had A Chat

So when Charlotte Art Consultant Larry Elder curated 8 of my large paintings to hang alongside Cascade, I seized the opportunity to have a long overdue conversation with the mobile's creator.  Tinguely died in 1991 just after finishing this waking animal. So....

Our chat is on canvas.  It is a dyptch of a duet.  Woven throughout with my own favorite motifs,  (trees, cactus, swimmers), it is a ballet of both our doing.
The conversation has it's asides,
some misunderstandings and quite a few raucous moments.
We touched clumsily on the industrial, but the undercurrent was there.
Would it be an exploration in heights?  Yes, but not in the expected way.
Oh, and contained violence--we went there.


Questions went unanswered.  It's Art.  You don't have to put words to everything.

But most of all, like all the best conversations, there was no predicting where it would go.

Much gratitude to Larry Elder Art Consultancy for this opportunity.  Also, many thanks to Emily Andress at Awaken Gallery for her representation.


Jean Tinguely’s 40-foot-tall kinetic masterwork, Cascade, has held court in the central lobby at Charlotte’s Carillon Tower at 227 W. Trade St. since 1991. The Bechtler family commissioned their Swiss friend to create the piece. Hester AG, a Bechtler owned company, developed the building.  It would be Tinguely's last artwork.  The sketches and notes, often on exhibit at the Bechtler Museum reveal an artistic process of working out arrangements on paper followed by improvisation and trial and error. 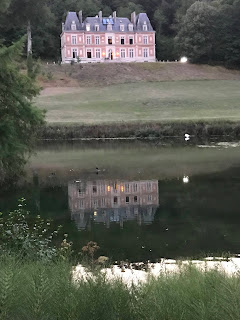 Capturing The Castle: A French Fortnight 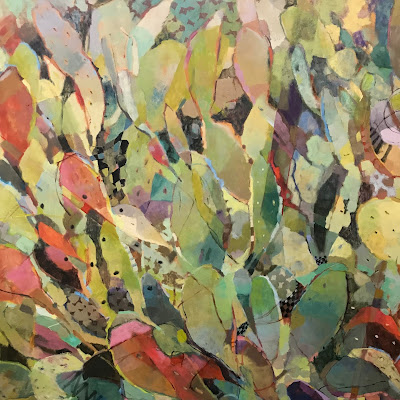 jeancauthen
I spend lots of energy figuring ways to combine my two great passions, painting and travel. My other passion is teaching. I offer various courses in Painting, drawing, Art History and workshops (regional and in Italy). Currently, I teach at UNC-Charlotte and offer a summer workshop in Italy through Il Chiostro. www.ilchiostro.com I also enjoy working with the Old Masters at Southminster Retirement Community.